Apparently I'm All About Cheetos and Insects

A website shown to me by my wife revealed to me that Cheetos and Insects are apparently very important to me. The website, wordle.net, takes any text and makes a word poster/art thingy out of the text. You can even link the site to a blog, which I did. In the poster/art thingys, the words that are used the most in the text are the largest to emphasize important topics. Here is the outcome of the text taken from my blog. 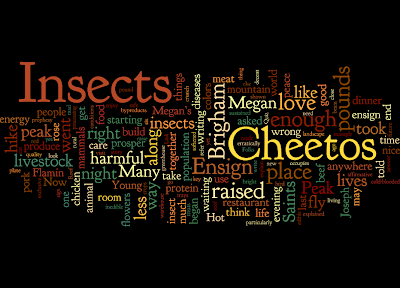 So here is my logic regarding this poster. My blog is about my life. This poster sums up what is in my blog. Therefore, the most important things in my life are Cheetos and Insects, since they are clearly the largest. Good for me to know.
Posted by Graham at 11:19 PM 6 comments:

Locust... It's What's for Dinner

This last week I read a fascinating Wall Street Journal article addressing the problem of providing animal protein for a world population that will reach 9 million by 2050. Article Link

Turns out insects are the answer. Now, before you hurl, let me explain why insects are such a viable food source and why you someday may enjoy these delightful treats. 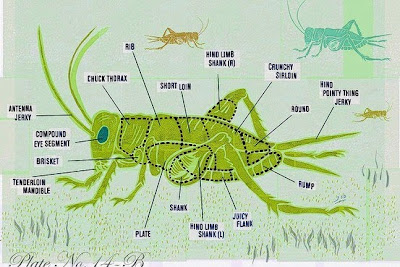 • Insects are perfectly safe to eat! “Less than 0.5% of all known insect species are harmful to people.” Many mammals, such as pigs and cows, are similar enough to humans that they can pass on diseases that affect us. Remember swine flu and mad cow disease? Insects are so different from us that the risk on getting harmful diseases from them is super low.

• More meat. Insects are cold-blooded, which means they use significantly less energy than mammals because they don’t need energy to keep warm. Result? “Ten pounds of feed yields one pound of beef, three pounds of pork, five pounds of chicken and up to six pounds of insect meat.”

• “Insects produce less waste... The proportion of livestock that is not edible after processing is 30% for pork, 35% for chicken, 45% for beef and 65% for lamb. By contrast, only 20% of a cricket is inedible.”

• Insects are environmentally friendly. Insects don’t use much water, and produce lower quantities of harmful byproducts, such as ammonia and greenhouse gasses. Did you know that livestock is responsible for 10% of greenhouses gases?

• Insects take up less room. Folks get up in arms when livestock aren’t given enough space or living conditions are otherwise poor. Insects like being in close quarters with other bugs. They can be raised on crowded trays in a warehouse. This frees up land that will become increasingly valuable to grow crops and house a growing population.

Insects may just be the key to the future. 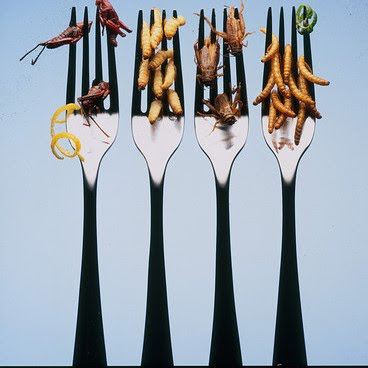 Many of you have heard the news; I’m engaged! Many have asked for the proposal story, so here it is.
On Tuesday, October 5, 2010, I took Megan to the Roof Restaurant for a nice dinner. The folks at the restaurant were kind enough to give us one of the best tables in the place, overlooking the Salt Lake Temple. They even had a red rose waiting for her on her plate. The roof is a particularly wonderful restaurant because high quality food and all-you-can-eat buffet are not mutually exclusive. Brilliant.
After dinner I took her for a night hike up Ensign Peak. It was a miracle that for the entire hike up, our time on the summit, and the hike down we were the only people on the mountain.
On top of Ensign Peak, I explained why I love the place. The peak was shown to Brigham Young in vision while in Nauvoo and Joseph Smith told Brigham that the peak was a suitable place to raise an Ensign to the nations. Joseph told Brigham that if the Saints built under the colors of the ensign, they would prosper and have peace.
Of course, the Saints build directly under the peak and the prophesy has been fulfilled. That is not to say that everything went right from then on. The valley received an unfriendly visit from the U.S. Army, experienced a plague of crickets, and went through numerous droughts, to name a few of the things that went wrong along the way. But in the end, the Saints have prospered and had peace. It is an impressive sight to stand on Ensign Peak and see the beautiful landscape that occupies the desert Brigham Young saw 163 years ago.
I thought this was a fitting Metaphor for starting out our lives together. I’m sure that things will go wrong along the way, but we have the promise that if we build under the colors of the ensign (the gospel of Christ), we will prosper in the end.
Anyway, the metaphor softened her enough that when I knelt down on my knee, fake ring in hand, and asked her if she would be my wife, she said “ya,” followed by a more affirmative “yes.” After I proposed I was filled with a feeling of optimism. That is a good sign, right? Needless to say it was a great moment. The night, however, still held some surprises.
During our decent of the mountain, we turned a corner and the beam from our flashlight fell upon an owl in the middle of the trail. We must have blinded the bird with the sudden flash because it began to fly around erratically. It started to fly away, but then made a sharp turn and began to fly right at us and hit Megan in the leg! Fortunately, no injuries were sustained by my new fiancée.
I took her home and dropped her off for the night. I had her good roommate, Rachel, get some flowers I had waiting in my apartment and place them in Megan’s room along with some rose petals while we were gone for the evening. I think the flowers provided a nice finish to Megan’s evening.
We are both excited to start our lives together. Megan is bright, energetic, spiritual, and totally gorgeous. It has been a pleasure to spend so much of the last year of my life with her and I look forward the eternity ahead of us. 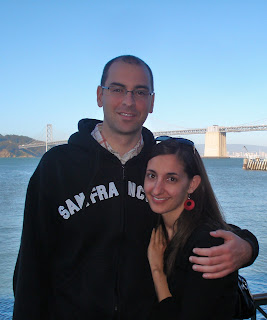 This is my first ever blog post. I'm starting my blog with 3 objectives:

1. To share what I care about
2. To maintain and improve my writing skills
3. To take time to think about my life and others' lives

Just for the record, I am not writing about topics in order of my caring for them (refer to objective #1). For example, if I were to write about Cheetos immediately after this paragraph, that does not necessarily mean that I care more about Cheetos than anything else. It turns out that Cheetos are way down the list, like #6.

Quiz (True/False): The thing Graham cares about the most is Cheetos. 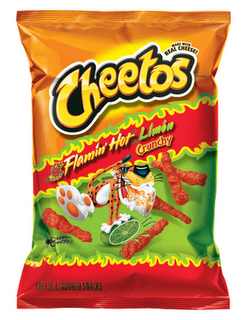 Graham
Happily Married. I love sports, good food, and good friends. I belong to the Church of Jesus Christ of Latter-Day Saints.